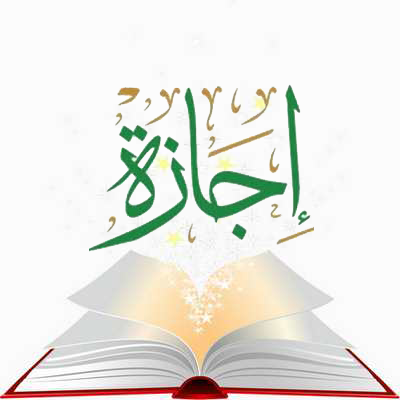 When the student reads the whole Quran correctly, with the Tajweed, and distinguishes the exits and pronounced correct, and then the Sheikh believes that he has become eligible to read, the Sheikh gives him a certificate (Ijazah).

The Sheikh examines the student at the beginning of a small test in order to determine his level and tell him the best program for him.

What is an Ijazah ?

“Ijazah” (in Arabic: الإِجازَة) linguistically means “permission”, “authorization”, or “license”. In terms of Quran study, it is an accredited certificate that grants its holder the authority of transmitting and teaching Quran recitation with tajweed or Quran Memorization, according to the Ijazah type. Moreover, it gives its holder the right and eligibility to certify others with the same authority as well. So this makes an endless chain of certified Quran narrators. Ijazah represents a great honor and authority in Islam since the early times of Islam. A student comes to his Sheikh or Imam and sticks with him, learns Quran recitation with tajweed from him OR Quran recitation by heart “in case of a Hafiz of the Quran”. Then, the Sheikh (Imam) listens to the student while reading or reciting Quran by heart, corrects him, and the student repeats again until the Sheikh is confident that his student is mastering his own knowledge so he gives him this Ijazah.